November 16, 2021 — As the models hit the catwalk for Season 19 of Bravo’s Project Runway this fall, NBCUniversal and Carvertise joined forces on a new marketing campaign that’s giving the Bravo hit show some added swagger.

The entertainment giant partnered with Carvertise, the leading rideshare advertising and marketing company in the country, to create a mobile marketing fleet of Uber and Lyft vehicles, wrapped with Bravo’s Project Runway’s colorful branding, to strut through Manhattan’s streets. Those lucky enough to snag a ride in the cars, which rolled through New York’s streets in October and November, had a chance to pose for an Instagram-worthy moment alongside the vehicles, which feature the likenesses of the show’s stars, mentor Christian Siriano and judges Elaine Welteroth, Nina Garcia and Brandon Maxwell. 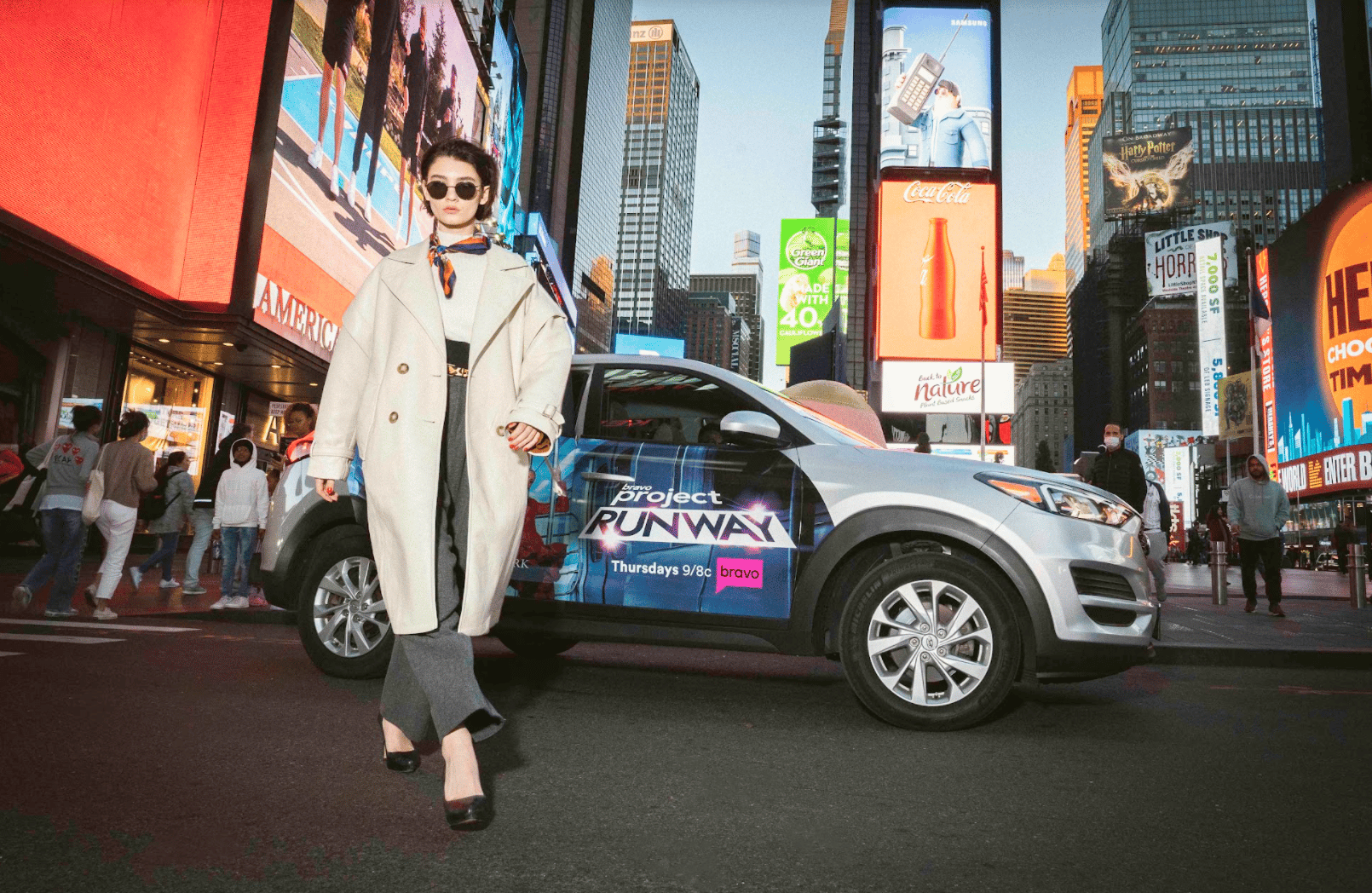 “Not only are these cars turning heads,” says Greg Star, co-founder of Carvertise, “but they’re attracting major buzz” and generating an estimated 7 million impressions in just a month.

Star says that the entertainment industry is a natural for rideshare campaigns, because the medium is more eye-catching and interactive than typical out-of-home marketing. He notes that other entertainment giants, including Netflix, have recently launched campaigns with Carvertise.

“While billboards and taxi tops have traditionally been the norm for many campaigns, our clients tell us that our branded cars are the most memorable OOH advertising medium they’ve ever seen,” Star says. And there’s data to back up their contention: statistics from a 2019 Nielsen out-of-home study reveal that wrapped cars have proven to be the most effective and memorable form of OOH advertising.

A benefit to this active platform is that the media and entertainment companies can take advantage of “swarm events,” where their cars congregate at major gatherings, such as sporting events and concerts/festivals, significantly raising the profile of their advertising. With data and GPS tracking technology, partners have the ability to see metrics they’ve never had before through digital retargeting and weblift analysis, offering a new level of insight into the effectiveness of their campaigns.

The bottom line? “Manhattanites are huge fans of fashion—and Project Runway,” Star says, “and Carvertise is excited to help drive the show’s success.”

Carvertise is America’s Largest Rideshare Advertising Company on a mission to revolutionize the way brands communicate with consumers outdoors. Leveraging a network of 550,000 registered drivers, Carvertise is running wrapped-car ad campaigns around the country for clients including Netflix, 7-Eleven, EA Sports, NASCAR, and GlaxoSmithKline. Geo-targeted, highly memorable, with a heavy emphasis on analytics, Carvertise is proudly spearheading the future of transit advertising. For more information, please visit Carvertise.com.