Nov. 7, 2022—While both the Philadelphia Phillies and the Houston Astros were hitting home  runs throughout baseball’s World Series last week, two advertisers were hitting marketing grand  slams outside of the Phillies’ Citizens Bank Park stadium. In the hours leading up to the Phillies’ home games this last week, Carvertise—America’s  leading rideshare advertising company—deployed fleets of branded cars on behalf of two  advertisers to drive through the crowded streets surrounding the sports arena. In one campaign, it partnered with the U.S. Virgin Islands Department of Tourism to send a fleet  of brightly-colored vehicles to roll through the middle of the action, reminding throngs of fans  that a visit to paradise is just a short jaunt away. 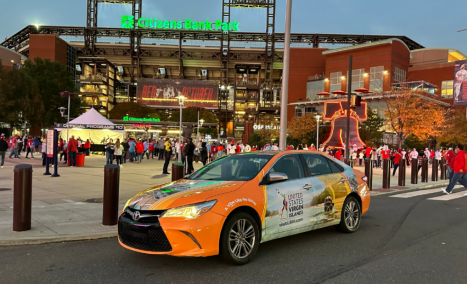 In a second activation, Carvertise partnered with Temple University to send a fleet of cars to  every Phillies game promoting the school’s sports management and MBA programs. “Both clients knew the streets surrounding the stadium were going to be packed with tens of  thousands of fired-up fans, and found a highly-memorable way to be part of the action,” says Jim  Fischer, VP of Sales for Carvertise.

The U.S. Virgin Islands Department of Tourism and Temple University are among the many  savvy advertisers taking advantage of Carvertise’s popular “Swarm Events,” where fleets of

branded vehicles are deployed where there are very large gatherings of people, including  sporting events, concerts and festivals.

And they’re not breaking the bank to do it. “In lieu of spending high six figures, or even millions,  on a sports stadium sponsorship, many of our advertisers are finding that they can make a huge  impression with fans at a fraction of the cost,” Fischer says. 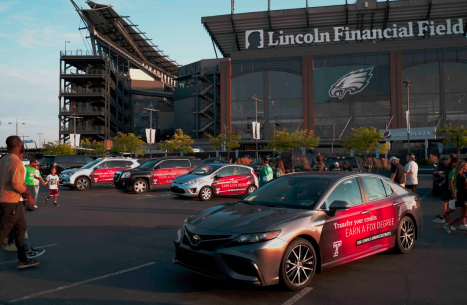 In the past several months, Carvertise has Swarmed a variety of popular events throughout the  country on behalf of clients across numerous verticals, from grocery store chains to online  gambling sites to beverage companies.

“These brands have all discovered sports marketing’s newest secret weapon,” says Carvertise  Co-Founder Greg Star. “They’re thrilled to be able to engage a crowd and get major buzz for  their brand by essentially driving numerous billboards. straight in to the center of action. No  other advertising medium can do that.”

And in terms of effectiveness, Carvertise’s mobile marketing campaigns clearly pack a marketing  punch worth rooting for: Statistics from a 2019 Nielsen out-of-home study reveal that wrapped  cars have proven to be the most effective and memorable form of transit advertising. Star says more big brands will be rolling out Carvertise campaigns centered around major  sporting events (including the Super Bowl) in the coming months.

“While we may not know who’s going to come out on top of each game, we know that our  clients will big the big winners with these unique mobile marketing campaigns,” Star says.

Carvertise is America’s largest rideshare advertising company on a mission to revolutionize the  way brands communicate with consumers outdoors. Leveraging a network of 550,000 registered  drivers, Carvertise is running wrapped-car ad campaigns around the country for clients including  Netflix, Bravo, 7-Eleven, EA Sports, NASCAR, and GlaxoSmithKline. Geo-targeted, highly  memorable, with a heavy emphasis on analytics, Carvertise is proudly spearheading the future of  transit advertising.